7. ANTENNAS: TO THE MW DXER, A BEVERAGE ISN’T SOMETHING YOU DRINK!

This is the commonest ‘specialist’ antenna used by listeners to MW frequencies because it is usable indoors, readily home-built and low cost. The loop possesses a very predictable directional receiving pattern which allows signals from different transmitter locations to be selected by carefully rotating the antenna about its vertical axis. In addition most loops are designed to be resonant on MW frequencies and therefore are tunable. This is often a very valuable introduction of selectivity before signals even reach the receiver. A good loop tuned to 1MHz will easily reject most signals more than + or – 50kHz away from the desired frequency, thus virtually eliminating any images or 2nd order intermodulation products generated within the receiver. 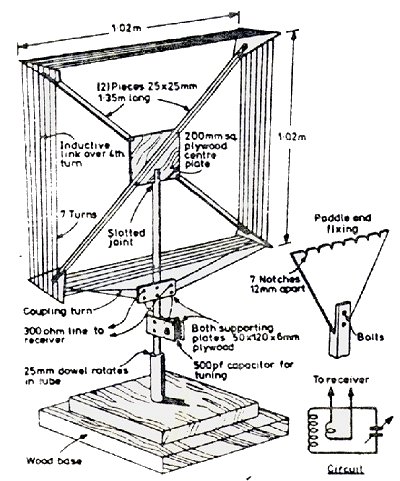 There are numerous designs for loops. Some are tuned, others are broadband; some are compact indoor models, others are massive outdoor devices, but the commonest design is based on a 1m square wooden frame on which 7 turns of wire have been wound. This inductance is then parallel tuned by a variable capacitor with a maximum value of about 400-500pF. The loop is mounted on a base supported by a wooden broom handle which acts as its axis of rotation. For full constructional details of loops it is best to seek out some of the specialist publications listed in Section 5 since there is not enough room here to cover the construction in detail. Figure 1 illustrates the all important directional pattern of the loop, which clearly exhibits two symmetrical nulls and peaks which can be directed to undesired or desired stations by physical rotation. In this way the loop is very capable of separating two or more co-frequency stations provided the signals are not arriving from the same (or directly opposite) directions. If the direction of arrival of two signals is separated by 60°- 120° then the loop really excels.

The second key antenna, and probably the best, for MW listeners is the Beverage. This antenna is one of the simplest and oldest designs around, having been developed by Harold Beverage in the 1920s. In fact an antenna of this type, 12km long, was used by Beverage in 1922 for the reception in the USA of some of the first low frequency (approx 1.2 MHz) transmissions from Europe. For a Beverage to be reasonably effective it needs to be between 1 and 10 wavelengths long, which on the MW band implies lengths between 200 and 5000 metres. The longer it is relative to the wavelength of interest, the more directional the antenna becomes. Remember that a Beverage has its maximum signal pick-up along its length and that the antenna should point along the great circle path towards the desired reception area (Figure 2). The Beverage is even cheaper than the loop to build. It is a broadband antenna (i.e untuned) and so effective over the whole MW band, but by virtue of its size it always points in one direction. This means that its reception nulls cannot be easily targeted on unwanted signals. Professional receiving installations (with bigger budgets than DXers) often construct whole arrays of Beverage antennas radiating out like spokes on a wheel from the listening site. The radio monitor of course is able to choose the antenna which gives best quality reception.

Over the last half century considerable research into the Beverage has been conducted and detailed design rules exist but for the radio enthusiast this is one antenna design that is very tolerant of design imperfections. Here’s what you need to do to put your own Beverage antenna together and to have a go:

Unfortunately the Beverage is a large antenna but it doesn’t really need much space and it can often be a ‘secret’ antenna erected unobtrusively. Ideally you need to have a large field or woodland at the back of your house but a long straight fence can be used to support the wire. If you have lots of space you have the freedom to chose the beam direction but if you are just taking advantage of local geography then you may have to accept the limitations imposed on you. If you lack any significant space at home a good alternative is to find some open land nearby.

Hard-drawn copper wire is best for a permanent antenna since it won’t break, but it is not cheap and is quite heavy. I tend to use 7/0.2mm multi-stranded insulated wire for temporary DX-pedition type antennas. A continuous barbed wire fence (galvanised steel) is OK also as long as it’s not too rusty to make good electrical connections. If you want to put up a cheap and disguised antenna use thin transformer wire (eg 40 gauge); you can lay this along a hedge row. Whatever wire you chose you’ll need to be prepared for breaks and repairs; ‘chocolate block’ connectors are very useful accessories when working with Beverages.

Gardeners-style bamboo canes (4-6 feet tall) are cheap and good for the job. Just cut a slit at one end with a penknife or junior hacksaw to hold the wire. Lightweight wire (eg 7/0.2mm) needs a support every 15 metres or so. If a straight hedge-row or fence runs in the desired direction you can dispense with the bamboo canes; likewise it is possible to support wire in trees or bushes as long as a reasonably constant height (between 4 and 10 feet) above ground can be maintained.

If a Beverage is operated just as a long wire it will be directional but will pick up signals from both ends of the wire but if the end of the wire furthest from the receiver and nearest the target reception area is terminated with a non-inductive (eg carbon) resistor equal in value to the antenna’s characteristic impedance (usually about 500 – 600 ohms) the antenna becomes unidirectional. For best results it’s good idea to experiment with the resistor value but even a fixed resistor of, say 560 ohms, connected between the antenna and the ground stake will do the job. One good way to produce the terminating resistor is to solder in series a dozen 1 watt 47 ohm resistors which are then encased in either heat -shrink plastic tubing or self-amalgamating tape. The use of many low value resistors makes the whole combination less prone to moisture affecting the total resistance value. Do not forget that for best results a good earth stake is needed at both ends of the antenna, one for the terminating resistor and the other for the receiver.

If you aren’t operating from a permanent home installation, or planning a full scale DX-pedition from, for example, a farmhouse, you’ll need portable equipment. One good portable receiver that performs very well on the MW band is the Sony ICF2001D. This radio can run off its internal batteries but alternatively a communications receiver that runs off 12V could be used. To make the most of the 2001D (and many other receivers) it is usually essential to place an antenna tuning unit between the Beverage and the radio to avoid overload problems caused by strong local signals. Just imagine the simplicity of driving up to your antenna, parking in a lay-by off the road, and then all that you need to do is pass the antenna wire through the car window, connect it to the receiver and you are ready to go! With a bit of ingenuity you could be DXing with your very own Beverage antenna; you certainly don’t need to own several acres of land. In fact recently I erected a Beverage on a piece of waste land not far from my home. To find the location I did a little browsing of local maps and then surveyed the sites by driving around the neighbourhood. I guess I was lucky but I only had to visit four locations before I found an almost ideal site. Furthermore the site was derelict and deserted so I put up a 330metre run of wire through the bushes. The receiver end terminates on a fence post with some large nails to which I simply connect the receiver with crocodile clips. whilst at the other end I installed the terminating resistor between the antenna wire and a copper earth stake driven deep into soft earth in a ditch. In my case a good ATU is essential since I have a local MW transmitter on 1170kHz. 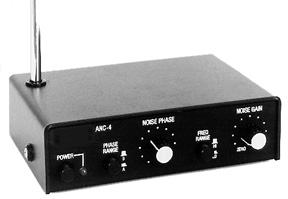 Phasing units, which allow the combination of signals from two antennas to reduce/remove interference or noise and to increase gain by adding signals together, have always piqued my interest. Any device able that will improve the chances of hearing something new or rare is worth consideration and a couple of home–brew phasers (inspired by Mark Connelly’s work) have graced my shack over the years. Their performance was OK though they were generally tricky to tune and almost always unstable. Enter the electronic version! A couple of manufacturers are supplying units, which have caught the attention of the DX-fraternity, namely MFJ Enterprises MFJ-1025 and MFJ-1026 and Timewave’s ANC-4, are producing moderately priced units. They even give you an advantage with shorter antennas (from home I get good results from two 30 metre slopers running 180 degrees out of phase). Both are available from the suppliers or Universal Radio. With these units deep, stable nulls on a variety of signals make it possible to totally remove interfering stations and open up a whole new world of possibilities. I use mine as much for increasing signal gain by phasing two antennas together as I do dealing with QRM. These commercially available units were intended primarily to cancel noise, yet have shown their real value in reducing interference and enhancing signals using signal inversion and phasing.
Back
Next