10. RECEPTION REPORTS: HOW TO VERIFY YOUR RECEPTION

These three letters, QSL, are probably a bit of a mystery to the newcomer, so what do they mean? Let us suppose you’ve just heard Radio Fiji on your pocket transistor radio how are you going to convince everyone that you weren’t just dreaming? Wouldn’t it be good to have something from the radio station confirming that you really did hear them? Well this is where QSL cards come into the picture; a QSL card is usually a picture postcard (although it can also take the form of a letter, a certificate, or a folder) sent to a radio listener by a radio station confirming that reception actually took place. In order to get a QSL card from a station there are several things you need to do, but firstly remember that you have to hear the station and then convince station staff that you did hear their signal. Normally one is obtained by sending a station a reception report giving details of how well their signal was received and of the programme material heard, as proof of reception. Naturally you need to say when you were listening (date and times should be in the station’s own local time). Historically, the QSL originated in the days when stations relied entirely on reports from listeners to determine their coverage area. In fact the letters ‘Q-S-L’ are based upon a radio operators shorthand code (Q code) system that evolved during the early days of radio. Nowadays, however, many stations use reports from professional monitoring stations and have more accurate coverage predictions available, and consequently the QSL survives largely as a service, from the station’s point of view. Additionally there is a significant difference in QSL policy between the international shortwave broadcaster, which issues QSL cards to maintain contact with and to gauge the size of its audience, and the local medium wave station being heard outside its usual coverage area. At best, the latter will treat a far off reception report with curiosity and will send out a QSL as a public relations exercise. At worst, to a station with few staff and a limited budget, reception reports from DXers can be a downright waste of time. It is therefore vital that MW DXers follow these top five tips when sending out reception reports to stations. 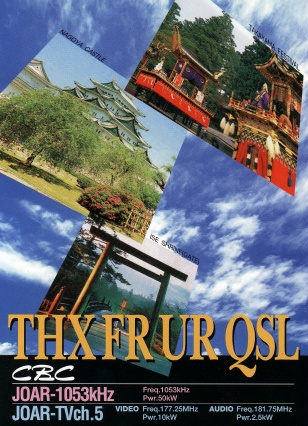 If you are one of the many MW DXers who not only likes to hear a station but wants to collect a verification or QSL to ‘prove’ that reception actually took place, then you’ll appreciate that hearing the station in the first place is only half the problem. I’m sure that you’ve wondered why not every station replies to your letters or reception reports. Perhaps only around 50% of MW stations reply; what can be done to increase this ratio ? Many MW broadcasters (in contrast to their SW counterparts) are not interested in audiences in far flung places since their double glazing advertiser is unlikely to extend his sales overseas! Firstly imagine yourself in the position of the station engineer and then imagine you received a letter from a faraway listener asking for a QSL card. Could you be bothered to reply if you’ve already received a hundred similar items in your in-tray that week? I know of station engineers that have commented ‘… some of the reports we get are terrible..’, ‘… we only now reply to reports containing IRCs as the postage was getting rather expensive..’, and ‘… I always reply to DX reports but never know if my letters are received..’ What a listener needs to do is to convince the station that reception really took place and that the report is not just being made up. In addition you need to make the station’s task in replying as simple as possible and it always helps to make your reception report stand out from the crowd so that perhaps it won’t end up in the ’round file’. Try these steps to good reception reports:

Include full details of commercials and public service announcements that you heard since virtually all stations record these details in their logs. Station slogans won’t on their own convince anyone since they are often well-known and widely reported and also lists of records heard are not always very useful since details aren’t always kept in station logs. Worst of all is something like ‘man talking..’ or ‘music’ which won’t help convince anyone! The golden rule is the more detail the better.

Use the station’s local time in reception reports so that they don’t have any tricky time zone conversions to do. The only exception is if the station is an international broadcaster that has been announcing a different time zone (e.g GMT or UTC) on air. It is often wise to note down the actual time announced in time checks rather than what your watch says since many stations have somewhat inaccurate studio clocks! Send return postage with your letter. Best of all include mint stamps from the station’s country but since this is easier said than done you could send International Reply Coupons which are obtainable from the Post Office. Unfortunately some countries do not accept IRCs for exchange into local postage stamps. For the USA and many other countries you can instead send a US$1 bill since hard currency is often appreciated. Enclose a prepared sticky label with your return address already on it. Write in the station’s natural language unless it is a big international broadcaster with various language departments. The natural language may not be the main language of the country they are in (e.g. Spanish speaking stations located in the USA).

Local MW stations don’t need listeners thousands of miles away; certainly they don’t attract more advertising because of this. So if you can help the station with constructive comment on programmes (what you liked and disliked) and on technical quality (eg modulation, audio quality or frequency stability) or by identifying interference, so much the better.

Make your letter stand out

BE POLITE and request a QSL card – never demand one. Introduce yourself and your location; maybe include a local picture postcard or some stickers from your local radio stations. Use commemorative or unusual stamps on the envelope; there maybe a philatelist at the station. Unfortunately in some parts of the world this might also make your letter attractive to thieving hands in the postal system. Give a realistic and detailed decription of reception conditions in words that are not too technical (remember it’s not always the engineer reading your letter). Never use SINPO style codes on their own. If you follow some or all of these tips you should not only increase your chances of getting a reply from a station but you will help contribute to good relations between DXers and broadcasters. Finally, if you receive a reply from a station it is an often over-looked basic courtesy to thank them. It is simple and quick (and not too expensive) to send a postcard direct to whoever wrote from the station letting them know that their letter arrived safely and thanking them for their trouble. Research during a Radio Netherlands Media Network edition revealed that very few bother to say ‘thanks’, and yet it makes all the difference.
Back
Next